Stay remote, go hybrid or head back to the office?

If the headlines are to be believed, a war is brewing in the modern workplace.

“Bosses are winning the battle to get workers back to the office” - Forbes1. “Bosses and employees are in a tug-of-war over where work will be done” - Fortune2. “Apple employees push back against return-to-office order” – Australian Financial Review3. “Employees are ready to fight for flexible work” – Washington Post4. 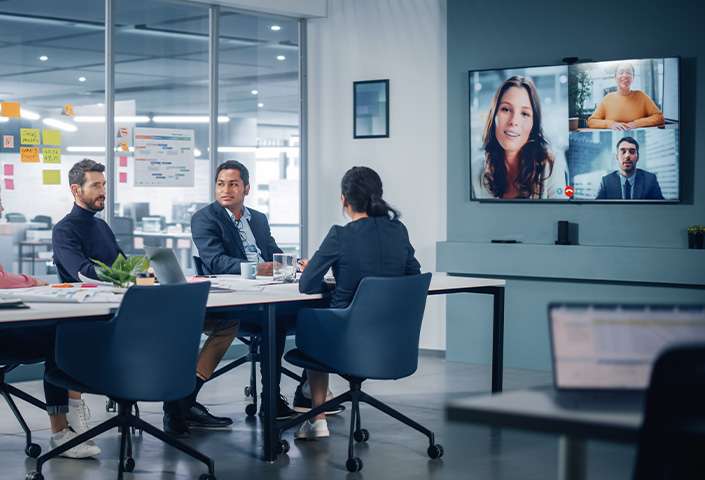 Battles and tug-of-wars. Pushbacks and fights. Not to mention endless stories featuring the actual W-word including the Wall Street Journal channeling Hollywood scriptwriters with this effort – “The war to define what work looks like5.”

Some readers may grin at such sensationalist language but the issue is no laughing matter for employers facing resistance from team members who accepted remote or hybrid work models during the pandemic and liked what they found. Based on a survey of more than 2,000 remote workers, Owl Labs’ 2021 State of Remote Work Report reported 74% of people believe working from home was better for their mental health and 84% would be happier if they continued to do so after the pandemic6.

That moment has now arrived and it would seem many workers are not only ‘happy’ to remain remote but desperate to do so.

On the other side of the equation are organizations that believe it is time to scale back remote work opportunities. With social distancing requirements no longer driving the discussion, Apple chief executive Tim Cook recently told employees at the company’s California headquarters that they must return to the office three days a week as he wanted to preserve the “in-person collaboration that is so special to our culture.”7 General Motors Co. made a similar announcement in September before backtracking to say a return to in-office days would not be required before the first quarter of 2023.

Then there is the Florida Bank whose return-to-office plans prompted this response from one employee: “I feel like I’m being punished. (Remote work) has been working so well and now you’re making me go back when I’m doing the exact same job there that I’m doing from home.”8

Employers wanting a return to the good old days, employees feeling like they are being “punished” and valid arguments on both sides of the divide. Make no mistake - 2023 is shaping up as the year the return-to-office debate could turn nasty.

The difference between hybrid and remote work

Before going further, let’s outline the definitions of the workplace models that are creating increasing tension between employers and employees.

Remote work involves staff doing work from home (or elsewhere) without going into an office and soared in popularity when the COVID-19 pandemic compelled the majority of the global population to stay at home. Benefits for employees include saving time and money on commuting, flexible work hours and a better work/life balance, while employers appreciate not needing to maintain office space and having access to a much larger talent pool as they are no longer restricted by geography. The biggest challenges of remote work include social isolation, lack of face-to-face interactions, team-building concerns and the risk of less feedback for employees.

Hybrid work is a more flexible approach that allows a mix of remote work and time spent in the office. Specific models vary, with one option seeing employees mostly work from the office but get one or two days per week or a few days each month to work remotely. Others use remote work as the default mode, while some hybrid models feature a mix of in-office and remote workers based on their personal preferences. In many ways, hybrid work is the best of both worlds as it allows staff to enjoy greater flexibility but ensures employers can promote face-to-face collaborations between colleagues and supervisors.

Of course, the third option is 100% office-based and it is the fear of a mandated return to this model that is causing some workers to prepare for a so-called ‘war’ with their employers.

While there has been plenty of anecdotal evidence in recent months of employers pushing for staff to return to the office, a recent LinkedIn study put hard numbers on the theory. After speaking to 100 Australian company leaders, the researchers revealed 36% of firms were already reducing flexible and hybrid working roles and almost half (47%) admitted they had also slashed employee sweeteners like work-from-home internet expenses and remote work equipment allowances.9

Such findings are backed up by other studies that have found 34% of U.S. workers have returned to the office full-time as of 202210 and three-quarters of managers want their employees back in the office11, citing a loss of company culture, potential lack of focus and drops in productivity as key reasons. Reinforcing the high stakes at play, one study even showed 77% of managers in the U.S. are ready to fire, reduce pay or limit promotion opportunities for staff that will not comply with return-to-office demands.

It should be noted that not all employees are back in the office at the behest of their managers. One in-depth analysis of the remote work landscape asked 1,000 workers the main reasons they had returned to the office in 2022 and their responses highlighted a few of the biggest struggles of working remotely. These included missing the enjoyment of office culture (25%), better ease of communication with leaders (21%), feeling isolated working from home (17%) and a range of technology and equipment issues (e.g. better internet connection – 13%).

Despite such staff-driven reasons for returning to the office, the survey also confirmed it’s employers that are most keen for a return to the old ways. Of those people who have returned to the office full-time, 43% said it was due to a directive from their employers12.

The challenge for employers

When Apple told staff they would need to increase their in-office presence to three days a week, they did not get the response they were hoping for. Within days, more than 1,000 employees had signed a petition demanding “location flexible work” and claimed senior leadership had failed to respect the “many compelling reasons” some people are “happier and more productive” working outside traditional office arrangements13.

A petition is one thing. The real danger for employers is the risk of losing talented people or failing to recruit them if they push through with their in-office demands. A mid-year survey of 8,000 workers by Gallup not only found the desire to work exclusively from home had more than doubled since October 2021 but that 60% of fully remote workers would be “extremely likely” to look for opportunities elsewhere if their employer failed to offer remote work at least some of the time14.

Amid a widely reported global labor shortage and much talk of quiet quitters, candidate ghosting and the Great Resignation, today’s businesses need to be doing all they can to be employers of choice and playing hardball on return-to-office mandates may not help their cause. For proof of that, we’ll leave you with the words of Harvard Business School Ethan S. Bernstein, who has been studying how the workplace has been changing since the start of the pandemic.

“Many employees now know what it feels like to choose and experiment with different ways of working,” the organizational behavior expert told The Harvard Gazette15. “Those who liked having choice aren’t willing to give it up and when choice is taken away, they are willing to walk – and we have a labor market that supports them doing so.”

In early 2020, a small business owner named Matthew Ross faced a dilemma that was becoming increasingly common for employers. As the co-owner of..

The four pillars of employee health and wellbeing

The International Labour Organization defines workplace wellbeing as “all aspects of working life, from the quality and safety of the physical..

It is fair to say Kevin O’Leary knows a thing or two about business. Nicknamed ‘Mr Wonderful,’ the Canadian entrepreneur is estimated to be worth..