Why Outsource To The Philippines?

Reasons to outsource to the Philippines

Its low living costs and first-class education system are just the beginning. See why the Philippines is the best offshoring destination.

Have your offshore team up and running in as little as 6 weeks.

While most businesses offshore to reduce costs or accelerate growth, there’s a lot more to it than just the cost and availability of labor. To really achieve the results you’re after, you need to choose a country with just the right combination of qualities.

English is the official language

The Philippines is the third-largest English-speaking country in the world, with approximately 60 million English speakers.

English is one of the country’s two official national languages (the other being Tagalog ), so everyone learns it at school, and it’s the official language of government, the legal system and higher education.

Importantly, this is more than just a statistic. Filipinos don’t just speak English; they speak it very well. In fact, among cities where English is a second language, Manila ranks no.8 in the world for proficiency.

The Philippines boasts a 97.5% literacy rate, and more than 680,000 people graduate from university each year. (For context, Australia has approx 300,000 graduates per year and the US has approximately 3 million.)

As a former US colony with a 90% Christian population, the Philippines has a very ‘westernized’ culture. Its cities, office buildings, malls and restaurants all feel very familiar to most Americans and Australians. And because there’s no language barrier or real workplace differences, working with Filipinos feels almost identical to working with Americans or Australians.

Thanks to exceptionally low living costs in the Philippines, labor and occupancy expenses combined are approximately 70% lower than in Australia and the US, so you can drastically reduce your operational costs.

Here are the top 10 countries used for offshoring: 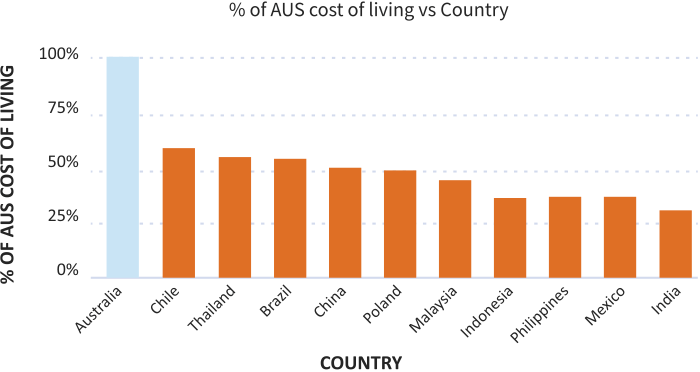 As you can see, the Philippines is towards the low end of the scale in terms of cost of living. Just as importantly, you’ll be improving the lives of your Filipino staff. The outsourcing industry has had an enormously beneficial impact on the local population of the Philippines, by providing long-term, fulfilling career opportunities that would otherwise have been unavailable to them.

With more than 41 million highly trained people in the workforce, the talent pool in the Philippines is deep and very rich.

You can outsource just about any role that can be performed via an internet connection – from accountants and accounts receivable staff to customer service reps and engineers. And you can fill roles at levels from junior and intermediate right up to senior and executive levels.

Filipinos are renowned for their loyalty and honesty, and for holding themselves accountable to their commitments. They value their jobs highly and tend to stay with good employers for longer than the average American or Australian employee.

“We embraced the culture. They’re very adaptable and the culture itself is a very personable, positive culture. The people are really quite affectionate, there’s strong emotion and they connect in well with both your business and your brand… and the work ethic is terrific. They will, with clear expectations and clear guidance set, work extremely hard.”

Hospitality is a big part of the Philippines’ economy, so most existing industries are customer service oriented. Filipinos place great importance on understanding and accommodating their customers, because it’s an integral part of their culture. They call it ‘a culture of customer service excellence’.

What’s more, large, multinational American and Australian companies have invested in customer service personnel and training for decades. So the labor market is rich in highly skilled talent.

The Philippines has very similar technology to the United States and Australia, and its government invests heavily in infrastructure, particularly in the cities. Manila, for example, is very much like any major American or Australian city, with a lot of large corporate facilities, modern office spaces, reliable utilities providers and solid telecommunications infrastructure.

Have your offshore team up and running in as little as 6 weeks.

Get in contact today, and have your offshore team up and running in as little as 6 weeks.